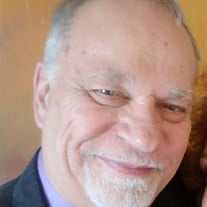 Wolfgang (Wolf) Moritz of Springville passed away peacefully in his sleep on February 2, 2021 at St. Vincent’s East Hospital. He was born April 30th, 1949, in Augsburg, Germany. He proudly served in both the Navy and the Army during which he served in the Vietnam and Iraq war. During his time in the service Wolf became a computer engineer, later a web designer and a self-taught accordion player, where he was a long-standing Member of the Alabama Accordionists Association. A musician by heart he would perform at various organizations, private parties and events. He was well known as “Mr. Oktoberfest” of Cullman County where he played for the last 20+ years. Preceded in death by his parents, Frantz (Frank) Moritz and Margit Geborene Langer and brother, Frantz (Frank) Moritz Jr. He is survived by his beloved wife Nora Moritz, sons, Eric (Veronica) Moritz, Jason (Ginalyn) Moritz, Jonathan W. Sepulveda, daughter, Lynn S. Hanson. Grandchildren, Zack Marley Moritz, Seth Marley Moritz, Uriah Marley Moritz, Jaslyn Hope Marie Moritz, Christian Jerry Trujillo Moritz, Jelena Emily Moritz, Jilian Marie Moritz, Alyssa Nikole Marie Hanson, Kayla Ashlei Marie Hanson, Hope Faith Marie Graves and a host of nieces, nephews, family and friends. A memorial for Wolfgang "Wolf" Moritz will be held on Tuesday, February 9, 2021 at the Deerfoot Memorial Funeral home located at 5360 Deerfoot Pkwy, Trussville, AL 35173. Visitation is welcome from 10-11am. The family welcomes everyone to attend and to join them in remembering all the positive and wonderful things about their beloved Wolf. *** Practicing Social Distancing/Masks are Mandatory No Exceptions*** The family will also be receiving flowers at the address provided above. A Military Funeral will be on Tuesday, February 16, 2021 at 2:00 PM EST at Fort Mitchell National Cemetery, 553 AL-165,Ft. Mitchell, Alabama 36856. The family would also like to extend a special thank you to Saint Vincent East SICU department for the wonderful care that was provided.

Wolfgang (Wolf) Moritz of Springville passed away peacefully in his sleep on February 2, 2021 at St. Vincent&#8217;s East Hospital. He was born April 30th, 1949, in Augsburg, Germany. He proudly served in both the Navy and the Army during... View Obituary & Service Information

The family of Wolfgang Moritz created this Life Tributes page to make it easy to share your memories.

Send flowers to the Moritz family.