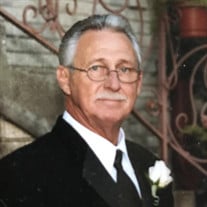 William Neal Chrisenberry, Sr. “Neal”, 79, born on April 6, 1941 in Birmingham, Alabama, passed away peacefully in his sleep on November 29, 2020. He is preceded in death by parents Hobert and Marguerite Chrisenberry and son-in-law, Paul Trull. He is survived by three siblings: Donnie (Debbie), Terry (Jean), and Theresa; former wife Sue Carolyn Elsberry and son William Neal Chrisenberry, Jr. “Chris” (Ronda), daughter Kimberly Trull; grandchildren Addison and Garrett Chrisenberry, Jacob Chambers, Alex Foster, and Mason Trull; plus many more relatives and friends. Mr. Chrisenberry attended Woodlawn High School and afterwards, joined the Navy; following four years in the military, he returned to Birmingham to build a successful construction company. He retired from construction in 2006. For those who knew Mr. Chrisenberry, he went by Neal, Mr. Neal, or Paw Paw. He was the life of the party, and everybody loved him. He had such a kind and generous soul and would give the shirt off his back for anyone. His son, Chris, was his most prized possession; they never went a day without talking to one another. Paw Paw ended every single phone call with, “tell the babies (Addison and Garrett) I love them and give them a kiss for me”. Mr. Neal will be greatly missed, but we know he is with Our Father in Heaven and we will see him again one day. Funeral service will be held at 2:00, service only, Tuesday, December 8th, at Faith Community Fellowship, Trussville campus. Pastor Steve McCarty will officiate. Due to Covid, there will be social distancing in the church sanctuary, In lieu of flowers, please send donations to Priority Veteran of Birmingham https://www.priorityveteran.org/

William Neal Chrisenberry, Sr. &#8220;Neal&#8221;, 79, born on April 6, 1941 in Birmingham, Alabama, passed away peacefully in his sleep on November 29, 2020. He is preceded in death by parents Hobert and Marguerite Chrisenberry and son-in-law,... View Obituary & Service Information

The family of Willian Neal Chrisenberry Sr. created this Life Tributes page to make it easy to share your memories.

Send flowers to the Chrisenberry family.