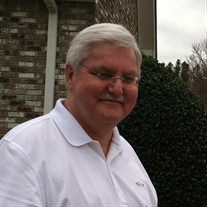 William Michael “Mike” Gibson, 68, of Clay, Alabama, passed away on Wednesday, July 22nd, 2020 with family and loved ones by his side. Mike was born in Birmingham, Alabama, on July 23, 1952, and grew up in the neighborhood of Roebuck. After graduating from Banks High School in 1970, he received his associate's degree from Jefferson State Community College. Upon finishing his formal education, Mike was a loyal employee of Alagasco for 42 years, where he worked until his retirement. He was also an actively engaged member of the United Steelworkers Union of America Local 12030, where he held various positions of leadership throughout the years, including serving as elected president for eight years. He also served on the board of the Energen Credit Union and acted as liaison between Alagasco and the United Way. In 1978, Mike was introduced to and wed the love of his life, Janice Strickland, to whom he was married for 41 years. Mike was a devoted Alabama football fan and lover of music, which included the band Chicago among many others, as well as various Southern gospel quartets. Mike was also a fervent student of history and politics. To those who knew him, he was a humble, virtuous, patient, and kind-hearted soul. Mike is preceded in death by his brother Alton Leroy Gibson Jr. and his parents Alton Leroy Gibson Sr. and Juanita Hayne. Mike is survived by his wife Janice, his only child and best friend Scott Gibson, his daughter-in-law Sky Gibson, his life-long friend Steve Kitchens, and his sister Drucilla Beasley. The family wishes to give special thanks to Dr. Tammy Leong and Comfort Care Hospice. In Lieu of Flowers, Donations can be made to St Jude Research Children’s Hospital. Please make checks payable to St. Jude Children's Research Hospital and mail your donation to: St. Jude Children's Research Hospital 501 St. Jude Place Memphis, TN 38105

The family of William Michael Gibson created this Life Tributes page to make it easy to share your memories.

Send flowers to the Gibson family.