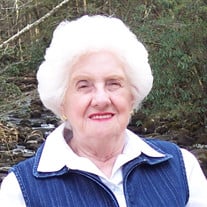 MARGARET VIRGINIA ROWAN SMITH (A Life Joyfully Lived) Virginia was born on April 12, 1929, in Birmingham, AL to Leon and Willie Mae Rowan. The eldest of six children, Virginia’s favorite memory is going to the country (Boaz, AL) with her siblings to visit their grandmother. Virginia left school early and went to work for South Central Bell until she retired in 1985. She was successful in her career there and received an award for sixteen years of perfect attendance. Virginia volunteered as a greeter at Cathedral of the Cross Assembly of God which was her church home for decades. Noah Wood Smith, Jr. (Bug) and Virginia wed on March 15, 1946. They met on a double date and ended up switching dates because they both loved to dance and the other two were not that into dancing! They were married for fifty-nine years until Bug’s death in 2005. Bug and Virginia had four children together: Ronald W. Smith (Bobbie), Connie Boone (Tim), Rhonda Brewster (Chuck), and Craig R. Smith (Mary), both now deceased. She is survived by two sisters, Mary Jones and Joann Condray, and many grandchildren, great grandchildren and great-great grandchildren. She was preceded in death by three brothers, Richard, Leon and Winston. Virginia enjoyed traveling all over the United States, cruising, visiting England and even experiencing baptism in the Jordan River in Israel at the age of 80 in 2010. After retirement, Virginia met with her Coffee Klatch every morning at the Whataburger in Center Point. She also enjoyed a morning walk, journaling, dancing, baking, family gatherings, bible study and meditation. Virginia was a happy person with a gift of laughter, a woman full of kindness, compassion and a sweet, sweet spirit. Virginia spent the last year of her life in Pensacola, FL at YourLife Memory Care where she passed into eternity peacefully on August 28, 2019, at the age of 90. She was well loved by her family and all who knew her. Virginia was a vessel of the love of the Lord to anyone who came in contact with her and she will be greatly missed

The family of Virginia Rowan Smith created this Life Tributes page to make it easy to share your memories.