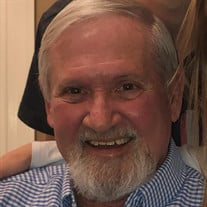 Terry Lee Selman, age 68, of Birmingham, Alabama passed away peacefully surrounded by his loving family on Wednesday, February 24, 2021. He was a 1971 graduate of North Ridgeville High School in North Ridgeville, Ohio. He served in the United States Airforce at Francis E. Warren Air Force Base in Cheyenne, Wyoming as a Missile Maintenance Team Member. Terry achieved the rank of sergeant and was awarded the Air Force Commendation Medal for meritorious service. After serving in the Air Force, Terry returned to Ohio and began a career in manufacturing, where he spent several years working for Invacare. A perpetual tinkerer, craftsman, artist, and gardener; Terry always had a new project underway. After relocating to Florida, he completed the Florida Nurseryman’s course at Central Florida Community College before opening his own lawn care and landscaping service in the Ocala, Florida area. In 2016, Terry retired to the Birmingham, Alabama area to be near his family. He was preceded in death by his parents, Charles Brooks Selman and Josephine Selman-Lynch. He is survived by his daughters, Nicole Stanbery (Scott) and Gina ( Steve) Devereaux; grandchildren, Bobby and Lilly Stanbery; brother, Gregory Selman (Debbie), and several nieces and nephews. A Memorial service will be held at First Baptist Church of Trussville, 128 Chalkville Mountain Road on Saturday, March 6, 2021 at 11:00 AM. The family will receive friends from 10:00 AM to 11:00 AM. If you are unable to attend in person, a livestream will be available at www.fbctrussville.org/live In lieu of flowers, donations may be made to the American Cancer Society or to the Birmingham, Alabama VA Healthcare System by contacting Birmingham VAMC Voluntary Service.

Terry Lee Selman, age 68, of Birmingham, Alabama passed away peacefully surrounded by his loving family on Wednesday, February 24, 2021. He was a 1971 graduate of North Ridgeville High School in North Ridgeville, Ohio. He served in the United... View Obituary & Service Information

The family of Terry Lee Selman created this Life Tributes page to make it easy to share your memories.

Send flowers to the Selman family.