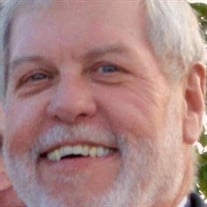 On March 8,1947, Ronald Odell Meadows was born to Frances Marcrum Meadows and Odell V. Meadows at St. Vincent’s Hospital in Birmingham Alabama. They provided Ronnie with a loving home filled with high expectations and encouragement for academic success. During his elementary school years, Ronnie developed an affinity for reading at the local library. His fifth grade teacher called him the “Little Professor” due to his insatiable quest for knowledge. As more time was spent at the library, the staff took notice and offered him his first job. A college student working at the library gave him the nickname, “Gooch.” While his family was not a fan of this nickname, his buddies seem to embrace it with ease. Consequently, during college, many did not even know his first name was Ronnie. Later, during his professional career, he became “Ron.” However, to his family he was forever," Ronnie.” Most activities centered around his youth group at Mt.Vernon United Methodist Church, Little League Baseball, and Boy Scouts. Because of his fascination of airplanes and cars, assembling complex models of various sizes became a huge hobby. Ronnie's family farm provided him with a great place to explore, fish and hunt. His daddy taught him to drive a tractor, bale hay, manage cattle, horses, timberland and stock the lake. It provided a great setting for Ronnie and his friends to romp, camp out and enjoy the great outdoors. He also learned invaluable life skills. Ronnie’s neighborhood friends were like family and many family members were his neighbors. It was a childhood where there was an abundance of sidewalks and front porches that prompted spontaneous interaction and supervision.The circle of love was vast and wide.Ronnie had many people in his life that looked after his welfare.School and church were only a short walk or bike ride. Most residents were known by name. Some of those residents were Ronnie’s grandparents and the bounty of multigenerational aunts, uncles and cousins. He participated in football and grew up with an unwavering support of the Crimson Tide. As an adult, he got serious about learning to play golf, flying planes, deep sea fishing, bow hunting and fencing. He also became a fan of NASCAR and working on his prized vintage 1963 Triumph TR-3B. After graduation from North Birmingham Elementary School and Phillips High School, Ronnie obtained a BS degree in Business and Marketing from Jacksonville State University. While employed at Harbert International, he traveled extensively to South America and Germany. Later he became the President of Harbert Machine Company Inc. and developed his own business, The Meadows Group Inc. However, on October 19,1987, Ronnie's life changed forever when his beautiful three year old son, Ronald Morgan Meadows, succumbed to leukemia. It was also during this time, Ronnie was named Leukemia Society Volunteer of the Year by the local chapter and also sought funds for the Ronald McDonald House. Memberships in the JSU Alumni Association, the Poinsettia Men’s Club and Trinity United Methodist Church also gave him opportunities to be of service. Ronnie passed away, Tuesday, May 11th, 2021 due to dementia and a metastatic cancer diagnosis. At his side was his sister, Susan Elizabeth Meadows Leach and his brother-in law, J. Brooks Leach. He is also survived by his niece, Lauren Elizabeth and numerous cousins. In addition to his parents and his son, Ronnie was predeceased by his maternal grandparents, Moses Andrew Marcrum and Ruth Elizabeth Woody Marcrum and paternal grandparents, Earnest Morgan Meadows and Maggie Nora Sellers Meadows. Wife, Sandra Kay Hipps Meadows, also preceded him in death in 2006. The family wishes to thank the numerous caregivers for their compassionate care of Ronnie and support for Susan. A graveside service at Elmwood Cemetery will be conducted by The Rev. R. Craig Smalley of the Cathedral Church of the Advent on Monday, May 17, 2021 at 3:30 PM. The family requests that in lieu of flowers, donations may be made at the Ronald Mc Donald House 1700 4th Avenue South Birmingham, Alabama 35233 or The Brother Bryan Mission 1616 2nd Avenue North, Birmingham, Alabama 35203. In lieu of flowers please donate in Memory of Ronald Meadows to Ronald McDonald House Charities of Alabama 1700 4th Ave S Birmingham, AL 35233 205.638.7255 or Brother Bryan Mission 1616 2nd Ave N Birmingham, AL 35203 205.322.0092

On March 8,1947, Ronald Odell Meadows was born to Frances Marcrum Meadows and Odell V. Meadows at St. Vincent&#8217;s Hospital in Birmingham Alabama. They provided Ronnie with a loving home filled with high expectations and encouragement for... View Obituary & Service Information

The family of Ronald Meadows created this Life Tributes page to make it easy to share your memories.

On March 8,1947, Ronald Odell Meadows was born to Frances Marcrum...

Send flowers to the Meadows family.