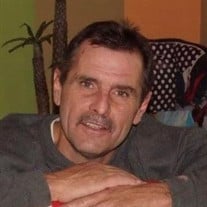 Raymond Lamar Blanchard Jr., was born on February 11,1965 in Birmingham, AL. He is survived by his five children, son Blake Hancock (Heather); son, Christopher Ryan Blanchard; daughter, Nicole Smith (Doug); son, Nathan Blanchard and daughter, Heather Trent; grandchildren, Austin, Ella, Landyn, Matt, Danny Ray, Brenna, Mollie, Abram, and Zechariah; parents, Raymond and Florence Blanchard; siblings, Lisa Davis (Rodney) and Stephanie Blanchard. Raymond was a race car enthusiast who loved adventure. He was full of love and loved by many. Raymond was a good soul and we are so very blessed to have had him in our lives. Scripture: 2 Corinthians 4:8-9 ESV We are afflicted in every way, but not crushed; perplexed, but not driven to despair; persecuted, but not forsaken; struck down, but not destroyed Times of pressing will come but we can rest during those seasons because He promises these things will not take us out.

The family of Raymond Lamar Blanchard Jr. created this Life Tributes page to make it easy to share your memories.

Send flowers to the Blanchard family.