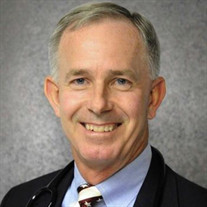 Dr. Michael “Mike” J. Rowland was a caring and loving husband, father, grandfather, brother, and friend. He left this world suddenly on October 31, 2021 at the age of 62 with his family by his side. He was born to Christopher and Patricia Rowland on January 26, 1959, in Charleston, South Carolina. Mike was fiercely loved within his family, his community, and the military. He graduated from The Citadel with a Bachelor’s of Science in Biology in 1981 and not long after, married his best friend from high school, Terri. She was the love of his life and provided an exemplary model of lasting and loving marriage. In 1986, he earned his Doctorate of Medicine from The Medical University of South Carolina in Charleston and completed his internship in general surgery at Spartanburg Regional Medical Center in South Carolina in 1987. In 1990, not only did he complete his Residency in Augusta, Georgia at the Medical College of Georgia, but also felt drawn to serve his country. He joined the South Carolina Army National Guard in 1990 with the rank of Captain as the Field Surgeon with the 1ST Battalion 263RD Armor Unit and several months later deployed to serve in Desert Storm from November 1990-April 1991. After his return, he graduated from the Endocrinology fellowship program in 1992 and moved to Birmingham, Alabama with his wife and five children to begin his work as an Endocrinologist. He was promoted to the rank of Major on February 9, 1995 before transferring into the Alabama Army National Guard in 1997 with the Medical Detachment as an Internist. While serving his country, he cultivated a medical practice in Birmingham, AL and served the community with both his head and his heart first at St. Vincent’s East, then at Brookwood Medical Center. Attaining the rank of Lieutenant Colonel on April 19, 2002, he deployed in 2003 and in 2005 for Operation Iraqi Freedom. Continuing to rise in the National Guard, he was promoted to Colonel on March 19, 2007 while remaining a practicing physician in his community. He deployed his final time from January-June 2010 to Afghanistan for Operation Enduring Freedom. After graduating from the United States Army War College in 2016, he became the Alabama State Surgeon and Commander Medical Detachment responsible for advising the Commanding Officer of the Alabama National Guard in all medical activities and missions culminating in guiding Alabama through the COVID-19 pandemic in 2020. He led the Medical State Partnership Program with Romania and helped their Army establish and build their Medical Service Corps. Additionally, he traveled to Romania to provide training to their doctors and medical care to their citizens, ultimately learning the Romanian language to better care for the people. His list of awards include the Meritorious Service Medal, Army Commendation Medal, Army Achievement Medal, Army Reserve Component Achievement Medal, National Defense Service Medal with Bronze Service Star, National Defense Service Medal, Global War on Terrorism Expeditionary and Service Medals, Afghanistan Campaign Medal with 2 Campaign Stars, Armed Forces Service Medal, Army Service Ribbon, Army Reserve Component Overseas Training Ribbon, Armed Forces Reserve Medal with Mobilization Device, NATO Medal, Alabama Faithful Service Medal, South Carolina Exceptional Service Medal, South Carolina Palmetto Service Medal, and South Carolina Governor’s Unit Citation Ribbon with 2 Oak Leaf Clusters, as well as, various national, state, and unit awards. In his spare time, he was active in Holy Infant of Prague Catholic Church where he was a founding member of their Knights of Columbus chapter. He had many hobbies that he passed on to his children and grandchildren. He mastered woodworking and used his workshop to build masterpieces from pens to renovations on his house to cribs for his grandchildren. His love of the outdoors was unmatched and loved spending time with his brothers, son, sons-in-law, grandchildren, nieces and nephews fishing up and down the Cooper, Wando, and Ashley Rivers. He was an avid horseback rider, training and riding his three horses, Jack, Somer, and Holly. He took up long-distance running completing multiple 10km races and half-marathons, ultimately completing the Marine Corps Marathon in 2013. Finally, but not least, he enjoyed upgrading and driving his Jeep in which he would take his grandchildren on off-road rides through his backyard. Above all his achievements, his greatest love and testament to the world is his family. While juggling his practice and military life, his family was never without his guidance nor his presence. He attended every childhood sports game, served as coach and assistant coach to his children’s soccer teams, and became a Troop 357 Scout leader with his son. In addition to his loving wife, Terri, of 38 years, he is survived by his children, Sarah Joyner (Chris), Katie Davis (Mike), Michael Rowland, Jr. (Andrea), Elizabeth Chapman (James), and Anna Rowland; his eight granddaughters, Claire, Kaylin, Caroline, Chloe, Ellie, Emerson, Sadie, and Scarlett; his brothers, Larry Rowland (Susie) and Rick Rowland (Pam); his sister, Lynn Turner (Billy); and many nieces and nephews. The memory of Michael J. Rowland shines within his family and reflects his mark on the world. In lieu of flowers the family request donations be made to the Wounded Warrior Project or the Battle Buddy Foundation.

Dr. Michael &#8220;Mike&#8221; J. Rowland was a caring and loving husband, father, grandfather, brother, and friend. He left this world suddenly on October 31, 2021 at the age of 62 with his family by his side. He was born to Christopher and... View Obituary & Service Information

The family of Michael Joseph Rowland created this Life Tributes page to make it easy to share your memories.

Send flowers to the Rowland family.