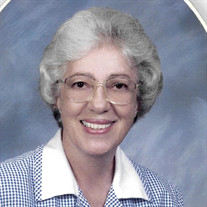 Mary Jo Anglin Pate was born April 14, 1935 near Pansey, Alabama and passed away peacefully at her son’s home in Trussville, AL after a short bout with pancreatic cancer on April 29, 2021 at the age of 86. The services will be at Deerfoot Memorial Funeral Home in Trussville located on Deerfoot Parkway, Thursday May 6 with Visitation from 4:30pm-6:00pm and the Service will be at 6:00pm. A Graveside Service will be held Friday, May 7 at noon (12am) at Union Springs Freewill Baptist Church, Pansey, Alabama below Dothan. Mary is survived by a son, Dr. Ronald Everett Pate (Patricia Johnson Pate), grandchildren J. Christopher Pate (Cecilia Cardona Pate), Caitlin Pate Atkins (Jonathan David Atkins), two great-grandsons Jonathan Thomas “J.T.” Atkins, Ryker Falcor Pate, other loving relatives scattered across Alabama, Florida, and Georgia as well as a wonderful church family. She was preceded in death by her parents, John Thomas Anglin and Ila Mae Sims Anglin, and a brother, Myers Edward Anglin, whom she worshipped that died at age 27. She also had many loving uncles, aunts, and cousins from the Anglin and Sims families, most of whom have preceded her in death. She attended Columbia High and Ashford High Schools graduating with honors. She attended Riley Business College and two years at Wallace Jr. College. She worked most of her life in accounting for different firms and did taxes on the side each year. In Pensacola she worked at Chemstand Corp. In Dothan she worked for Supreme Ice Cream, Wayne Culpepper’s Air Service, sold men’s clothes at Sears and Roebuck nights and weekends every Christmas for extra money for gifts for her family, kept extra books for Johnny Culpepper’s used car business at home until he purchased radio station 2WNT and West Main Office Building and she went to work for him fulltime. When he built a new, much larger used car center and became involved with some other businesses, she moved to the used car center to be on location there until it closed. She then went to work for a short time at the Cadillac Dealership before moving to Countywide Dodge-Chrysler-Plymouth. When they closed, she worked at GNC for a time before moving to Woodall’s Heating and Cooling then finished out her time to retirement at Concrete Incorporated. Getting bored after retirement she returned to work for the United Way 211 program in the office at age 73. She loved people and working with others to accomplish daily tasks. At the end of the month, she could often be heard with a joyful shout of “Hallelujah!” or an exhausted sigh of “Amen!” when the books “zeroed out.” She received numerous awards and recognitions for being good at her work including a customer service and sales award from GNC. She was known especially for reducing the quarterly tax bill at almost every place she worked the first time she did that report often getting the company a refund. At the end of several IRS audits at various companies, she was commended by the IRS agents more than once for her clean, clear, accurate books. She loved her church life and friends. Early in life she attended, was baptized in the creek below the church on family property, and taught Sunday School at Union Springs Freewill Baptist Church in Pansey, Alabama. Later she joined Calvary Baptist in Dothan and was baptized there because of the policies of Calvary. She involved herself with the youth ministry in a variety of helping and transportation roles. After her son went away to college, she involved herself in teaching and growing a large college age Sunday School class. In her later years she moved to Birmingham and joined Hilldale Baptist Church. When Hilldale merged with Palmerdale Cross she was right there with them until she was no longer able to drive safely to the church. She watched online and talked with her friends as long as she was able. She especially appreciated the Loving Touch Ministry to the homebound family and friends of PCBC. She loved her family and took care of her mom and dad at home until they passed away. She loved her son and kept up with everything he did over the years and encouraged him forward even when she didn’t like it. She loved animals. She always had dogs and she adopted every stray cat and dog that came by until it decided it was time to move on.

Mary Jo Anglin Pate was born April 14, 1935 near Pansey, Alabama and passed away peacefully at her son&#8217;s home in Trussville, AL after a short bout with pancreatic cancer on April 29, 2021 at the age of 86. The services will be at Deerfoot... View Obituary & Service Information

The family of Mary Jo Anglin Pate created this Life Tributes page to make it easy to share your memories.

Send flowers to the Pate family.