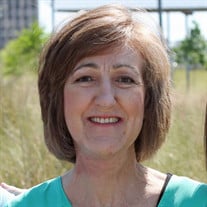 Marsha McDuff Flurry, age 62, of Clay, Alabama passed away peacefully on Monday, July 27th, 2020 with her children by her side. She was a loving mother, daughter, sister and friend but her favorite title and role in life was “Shashe” to her grandchildren. Marsha was born in Birmingham, AL on July 13th, 1958 and grew up in the South Roebuck area. She graduated from Banks High School in 1976 and later received her associate’s degree from Jefferson State Community College. Many cherished relationships were built and most of her career was spent working at the Howard Hughes Medical Institute in the UAB Department of Immunology and later at Southern Company Services’ engineering offices in Inverness where she worked until her battle with adenoid cystic carcinoma (ACC) began in 2012. Though the following 8 years proved difficult, she was most proud of and received the greatest joys from being able to watch her 5 grandchildren grow, play, compete, perform, goof off, create, craft and thoroughly entertain her through those years. Marsha is survived by her children Sara (Jay) McFarland and Justin (Ashley) Flurry; grandchildren Hadley, Audrey and Mallory McFarland and Carter and Caroline Flurry; sister Rebecca Leverett; and brothers Charles and David McDuff. Marsha is preceded in death by her parents R.H. McDuff and Mary Evelyn McDuff and brother Stephen McDuff. The family wishes to give special thanks to Dr. Keith Swetz, Sally Holmes and the entire staff at UAB Palliative & Supportive Care Clinic for their many years of care and support along with the staff at Compassus Hospice Care at St. Martin’s in the Pines, who lovingly cared for her and her family in her final days. Though we are missing the physical embrace of many friends and family right now, given the current pandemic challenges and unfortunate weather forecast this week, an outdoor memorial service will not take place as planned at this time. A private graveside service for immediate family is planned for Friday, July 31st at Sulfur Springs Cemetery in Trussville. In lieu of flowers, the family requests that donations be made in Marsha’s memory to Red Mountain Grace, a local medical housing ministry in Birmingham, AL (www.redmountaingrace.com). The foundation for what would become Red Mountain Grace was laid by a longtime family friend in early 2013 very soon after Marsha’s extended cancer treatment in Seattle, WA during the fall of 2012. With she and her family understanding firsthand, the difficulties of long-term medical treatment away from home, they have been supporters of this local ministry since its beginning to show grace and Christ’s love to others walking through all-too-familiar struggles.

Marsha McDuff Flurry, age 62, of Clay, Alabama passed away peacefully on Monday, July 27th, 2020 with her children by her side. She was a loving mother, daughter, sister and friend but her favorite title and role in life was &#8220;Shashe&#8221;... View Obituary & Service Information

The family of Marsha McDuff Flurry created this Life Tributes page to make it easy to share your memories.

Send flowers to the Flurry family.