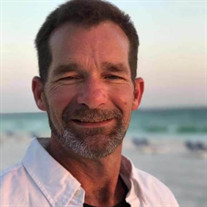 In the early morning hours of Saturday, August 8, 2020, pancreatic cancer succumbed once and for all to the almighty power of the Father, Son and the Holy Spirit that dwelled within MARK ANDREW PHILLIPS. Although trials are woven into the fabric of his life song, this is not a story of pity or despair. This is a glimpse into the heart of a man who learned to love and follow Jesus. “Everyone who calls on the name of the Lord will be saved,” (Romans 10:13) and with this reassurance we proclaim with confidence that somewhere beyond a gate made of pearl where tears, grief, heartache, pain, disappointment, sickness and death do not exist; lies the precious soul of a man that cancer can no longer reach. There to welcome him Home was his Lord and Savior; his father, James M. Phillips; his grandparents, Gus and Ottie Mae Phillips; his uncle, Jack S. Phillips; his oldest brother, James M. Phillips; his nephew, John M. Kelly, Jr.; his aunt and uncle, Don and Irene Alkins; and his cousin, Mary Alkins. One would surely have given many things to witness such a beautiful reunion. Mark Andrew Phillips was born February 10, 1965, to Jim and Amy Phillips. He grew up the most precious baby brother of six children: Jim (Beth), Tom (Beth), John (Vicki), Jackie Perryman and Tim (Brandy). Mark liked to think they saved the best for last. He was always known for his funny faces, big heart and infectious personality. He attended E.B. Erwin High School and later moved with his parents to Jasper, AL. In 1988, Mark’s life was changed forever when he became the proud, doting father to his baby girl, Ashley Marie. She had him wrapped around her tiny finger from day one and he adored being there for every milestone she achieved, from saying her first word to graduating from nursing school. Ashley says that her dad was one of the best. He always loved and encouraged her. He was the first to agree to last minute vacations with her friends and he treated all of them like they were his own. He was the fun dad that everyone loved. He was a helper with a servant’s heart. Mark was thrilled when Ashley married Drew Gill and they began their own family with Adalyn and Owen. No Papa could be happier than this guy right here. In 1991, Mark’s life changed again, in the form of a mirror image of himself, little James Andrew. This baby boy was a pistol, full of excitement and energy. He was a daddy’s boy and followed in Mark’s footsteps every chance he got. Daddy’s and sons bump heads sometimes, but Andrew says they always made up and showed love for one another. He valued Mark’s input on every life decision that he made. As he got older and chose a career in welding, some were skeptical, but Mark cheered him on every step of the way. He was the best dad a guy could want and Andrew was thankful to have him. Mark loved supporting Andrew when he became a father to Aiden and Grayson. And saw that love exemplified when he married Christina and welcomed baby Bear. The running theme in this story is LOVE. Mark loved his family, his babies, his grandbabies and last December he married the love of his life, Angela Powers, at their church, Argo Christian Fellowship. They had been friends in high school and reconnected the last few years. Angie says that her only regret is that they didn’t find one another sooner. She loved watching him be Papa to his babies. He enjoyed fishing and piddling with cars. He had such a big heart and whether he had known you for years or was meeting you for the first time, he left an impression. This marriage stood on the foundation of “in sickness and in health”, but it thrived in its own special way. It was truly a story of quality over quantity. Mark was a beloved Uncle, Great Uncle and Great Great Uncle to a large host of nieces and nephews. He leaves behind fond memories with each of them. They loved his big hugs, his honesty, his transparency and his kind heart. He never missed an opportunity to take a picture with them or say I love you. Mark was a faithful employee of Dowdey & Associates. This was his second family. People that he loved with, laughed with, cried with, and did life with. When Mark got sick, this company stood in his corner. They rallied behind him and encouraged him to fight hard and know that he would always have a place there. They were faithful in so many capacities and blessed him in ways that words do not describe. He loved each and every one of them and he lived life in a way that they knew it. One of the last things Mark wanted in this life was for old wounds to be healed. For hurts not to be forgotten, but forgiven. For God to touch his family and friends and minister to them in a way that only He can. He wanted the love he had for each of them to be exemplified. For them to feel it for one another. Mark believed in second chances. He believed in love and forgiveness. He believed in family. Services for Mark Phillips will be held Wednesday, August 12, 2020, at Argo Christian Fellowship. Private family visitation will be from 9:00am-9:30am. Public visitation will be from 9:30am-11:00am with funeral service to follow at 11:00am. A private family burial will immediately follow.

In the early morning hours of Saturday, August 8, 2020, pancreatic cancer succumbed once and for all to the almighty power of the Father, Son and the Holy Spirit that dwelled within MARK ANDREW PHILLIPS. Although trials are woven into the fabric... View Obituary & Service Information

The family of Mark Andrew Phillips created this Life Tributes page to make it easy to share your memories.

Send flowers to the Phillips family.