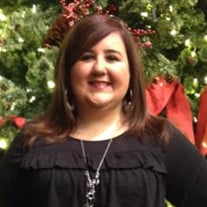 Kimberly Lusanna Tipps, 37, went to be with her Lord and Savior, Jesus Christ, on Monday, October 21, 2019. She was a devoted and loving daughter and granddaughter. She enjoyed playing the saxophone, getting dressed up, taking care of her dogs, drawing, decorating, hosting gatherings, going to Talladega races, traveling, and listening to music—especially Mercy Me, Carrie Underwood, and Alan Jackson. She had been a member of the Church of the Highlands for five years. Until she was five years old, Kimberly lived in Cleveland, TN, and then moved with her parents to Birmingham, AL. She was a 2000 graduate of Hewitt-Trussville High School, where she played in the marching and jazz bands; she received the Jazz Band Award and lettered in band. Kimberly graduated from Gadsden State Community College in 2004, where she was also in the jazz band. There, she received the Outstanding Music Award. Additionally, Kimberly was a 2010 graduate of Columbia Southern and was working toward her Masters degree in Healthcare Management. She worked at St. Vincent’s Birmingham as an HIM Tech, as well as at Patterson’s Pharmacy, for the past five years, and was a very loyal and diligent worker. She always put others before herself at work and at home. Kimberly was preceded in death by her paternal grandparents, Bill and Irene Tipps, maternal grandparents, Royal Esco and Nelma Trent, and her uncle, Robert Ashby. She is survived by her parents, Cecil and Karen (Trent) Tipps, her brother Ethan Tipps, and his wife, Laura Ann (Brown) Tipps. She is also survived by her aunts and uncles: Doug and Rose Roelofs, Nancy Ashby, Allen and Theresa Blakemore, and several great aunts, uncles, and cousins. The family will receive friends at Deerfoot Memorial Funeral Home for visitation on Thursday, October 24, from 5pm – 7pm. A celebration of life service will be held Friday, October 25, at 11am, with pastor Mike Jackson officiating, also at Deerfoot Memorial Funeral Home. Internment will immediately follow the service, and will be at Jefferson Memorial Gardens. In lieu of flowers, monetary gifts may be sent to Church of the Highlands (Grants Mill campus) in memory of Kimberly. Their address is 4700 Highlands Way, Birmingham, AL 35210. We encourage you to share your memories and condolences with the family by going to www.deerfootmemorialfuneralhome.com.

Kimberly Lusanna Tipps, 37, went to be with her Lord and Savior, Jesus Christ, on Monday, October 21, 2019. She was a devoted and loving daughter and granddaughter. She enjoyed playing the saxophone, getting dressed up, taking care of her dogs,... View Obituary & Service Information

The family of Kimberly Lusanna Tipps created this Life Tributes page to make it easy to share your memories.

Kimberly Lusanna Tipps, 37, went to be with her Lord and Savior,...

Send flowers to the Tipps family.