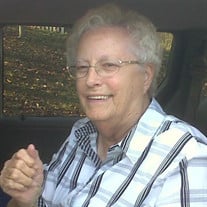 Joyce Marie Winham born May 3rd 1929, aged 92 years old, died March 21st 2022 at home. She is preceded in death by her parents, Joseph B. and Annie Marie Winham, her brother William (Bill) Winham, and her nephew Charlie Bennett. She leaves behind her nephew Russell Winham, niece Myla (Charles) Thomas, nephew Trask Bennett, niece Kandy Davis, and great niece Serena Thomas. Joyce was born in Fulton Springs Alabama, now known as Fultondale. She went to school at Lewisburg School. Around 1945, she and her family moved to the Woodlawn area. Joyce worked at a fruits and vegetable stand to help support her family until she got a better job at the Burger-Phillips department store. She later worked for South Central Bell, but her main work life was at Roadway Express from 1956 to 1992 when she retired. She was a member of Pinson Presbyterian Church where she served as both a Deacon and an Elder. She was very involved in Christian Endeavor as a youth leader. Every year, she used one of her vacation weeks to be the Christian Endeavor Junior Worker Leader at the Christian Endeavor camp. She loved it. After Pinson Presbyterian merged with the Huffman Presbyterian church to become Grace Presbyterian (now Cahaba Springs Presbyterian), she became a volunteer at the EACM food bank in East Lake. She continued volunteering there until age 87. After retirement, Joyce became a volunteer at an adult daycare center. She helped entertain the clients and drove them home in the church van. Joyce despised cooking, but there wasn’t a restaurant she didn’t love. Joyce also loved the outdoors and kept her yard as neat as a manicured park. She adored playing softball and played it until her 50s. She was a fantastic bowler and continued to bowl until she was 87. Joyce was also an avid baseball fan of the Braves, an Alabama football fan, and an NFL Cowboys fan. She was beyond happy when her Braves won the 2021 World Series. Joyce was stubborn as a mule, the toughest woman in our family, and yet incredibly compassionate. She served as a role model and inspiration to several generations, touching the lives of so many with strong and comforting hands. She was such a generous person: with her time, her love, and her resources. She lived by this motto: “Unhappy memories are just that: memories. Push them aside. Live in the present. And give encouragement to yourself and others.” She was the best daughter, sister, aunt, and friend. And although she never had any children, she was the best parent you could ever want.

Joyce Marie Winham born May 3rd 1929, aged 92 years old, died March 21st 2022 at home. She is preceded in death by her parents, Joseph B. and Annie Marie Winham, her brother William (Bill) Winham, and her nephew Charlie Bennett. She leaves behind... View Obituary & Service Information

The family of Joyce Marie Winham created this Life Tributes page to make it easy to share your memories.

Send flowers to the Winham family.