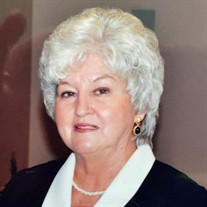 Joyce Johnson Newman, 70, of Odenville, AL went home to be with her Lord and Savior, Jesus Christ, on Thursday, December 9, 2021 after a long and courageous battle with cancer. She was born on January 19th, 1951, in St Clair County, Alabama which she called home for most of her life. She is preceded in death by her parents, Vince and Getrude Johnson, her son, Michael Leroy Newman, Jr., brother, Jerry Wayne Johnson, and husband, Jerry Wayne Chaney. She is survived by her daughter, Robin (JD) Satterfield of Odenville, AL, her sisters, Virginia (Jim) Gray of Pell City, AL, Betty (the late Frank) Zack of Collierville, TN, Jeanette Cappoccia of Birmingham, AL, Mildred (Jim) Malone of Trussville, AL, Carolyn (the late Mike) Quick of Odenville, AL, brothers Leon (Christy) Johnson of Mt Juliet, TN, Jeffery (Pat) Johnson of Springville, AL and her four grandchildren, Shannon (Candice) Bailey of Ashville, AL, Corey Bailey of Odenville, AL, Jason Newman of Tarrant, AL, and Tiffany Newman of Remplap, AL. Five great-grandchildren, Marley, Willow, Maddi, Meadow and Lachlan. Her very special Friends, Jean Holmes, and Ricky and Cathy Melvin. Joyce’s beautiful smile and home cooking will be missed by those closest to her. Joyce was best known as being devout Christian with a servant’s heart. She was a member of Faith Resurrection Outreach in Pell City, Alabama. She left a legacy of devotion to her faith, dedication to her family and friends, and was a great example of Jesus’ Grace and Mercy. Visitation will be held on Sunday, December 12, 2021 from 4:00 PM - 6:00 PM. Funeral Services will be officiated by Brother James Eason, Brother Lawrence Prince, and Brother Stanley Owensby and will be held on Monday, December 13, 2021 at 11:00 AM at Deerfoot Memorial Funeral Home, 5360 Deerfoot Parkway, Trussville, AL 35173 followed by a graveside service at Branchville Cemetery in Odenville, AL. “Come to me all of you who are weary and burdened and I will give you rest.” Matthew 11:28.

Joyce Johnson Newman, 70, of Odenville, AL went home to be with her Lord and Savior, Jesus Christ, on Thursday, December 9, 2021 after a long and courageous battle with cancer. She was born on January 19th, 1951, in St Clair County, Alabama... View Obituary & Service Information

The family of Joyce Johnson Newman created this Life Tributes page to make it easy to share your memories.

Joyce Johnson Newman, 70, of Odenville, AL went home to be with...

Send flowers to the Newman family.