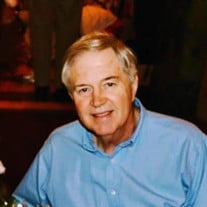 Joseph Lynn Dorman, age 72, of Birmingham, Alabama, went to be with the Lord on October 4, 2020. He was born April 5, 1948 in Birmingham, Alabama to James A. Dorman and Dorothy Gayle Dorman. Lynn was a 1966 graduate of Mortimer Jordan High School. He married Sharon Howard in 1967 and shortly thereafter enlisted in the US Coast Guard where he was active duty for 4 years before being honorably discharged. He received his BS in Electrical Engineering from UAB and his MBA from Auburn University. He retired from Southern Company/Alabama Power after almost 30 years of service. He was a member of Gulf Beach Baptist Church in Panama City Beach, Florida. Lynn was an avid Auburn fan; some his happiest days were spent in Jordan Hare stadium with his family, binoculars up and headphones on. A man of many interests, he held his pilot’s license, was a licensed general contractor, and spent his retirement day trading. Nothing, however, brought him greater joy than being Granddaddy to each of his 7 grandchildren. He was greatly loved and admired by his family and will be very missed. Lynn was proceeded in death by his parents, James A. Dorman Jr. and Dorothy Gayle Dorman, and his brother Richard Dorman. He is survived by his wife of 53 years, Sharon Howard Dorman, his children, Amanda Dorman Groce (Casey) and Ethan Howard Dorman (Blair), and grandchildren, Henry Groce, Thomas Dorman, Annabel Groce, Ellie Dorman, James Dorman, George Groce, and Charlotte Dorman. He is also survived by his siblings, Wayne Dorman, Barry Dorman (Lea), and Brenda Hauskins (Jesse), sister-in-law, Layne Howard, and many loved nieces and nephews. A memorial will be held to celebrate Lynn’s life on Monday, October 12, 2020 at Mountain Brook Community Church at 11:30 AM. Brother David Spray will be officiating. In lieu of flowers, please consider making a donation to the Lewy Body Dementia Association, Inc., 912 Killan Hill Road S.W., Lilburn, GA 30047.

Joseph Lynn Dorman, age 72, of Birmingham, Alabama, went to be with the Lord on October 4, 2020. He was born April 5, 1948 in Birmingham, Alabama to James A. Dorman and Dorothy Gayle Dorman. Lynn was a 1966 graduate of Mortimer Jordan High... View Obituary & Service Information

The family of Joseph Lynn Dorman created this Life Tributes page to make it easy to share your memories.

Joseph Lynn Dorman, age 72, of Birmingham, Alabama, went to be...

Send flowers to the Dorman family.