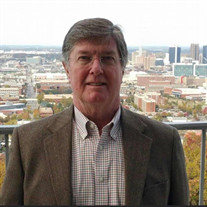 John Ewing Huie, age 67, of Trussville went to be with his Heavenly Father on Monday, August 31, 2020. He was a beloved husband, father, granddad, son, brother, uncle and friend to all he knew. John was a better man than the general image we envision when someone is referred to as a gentleman. He was a thoughtful, dependable, and gentle man who was naturally inclined to ask for less and offer more. He was born on November 19, 1952 and raised in Newbern, Tennessee. He graduated from The University of Tennessee with a bachelor’s degree in Agricultural Science. After some time alongside his father in farming, he later built his career in the salt business. Many cherished relationships were built and most of his career was spent working as a territory sales manager. During his retirement he married the love of his life and moved to make Trussville, AL his home in 2015. Although his time was short in Trussville, he loved this town and made many friends. He enjoyed playing pickleball, driving a school bus, and Wednesday night church dinners. He loved camping and traveling with his wife Susan, riding bikes with friends, working in his garden, and spending time with family. He was preceded in death by his parents: Edward Campbell and Drucilla Garner Huie, and his beloved sister: Jennifer Huie Tucker. He is survived by his loving wife: Susan Evans Huie, his children: Mackenzie Huie Warren (John), Walker JA Huie (Kelly), and Edward Tyler Huie, adopted granddaughter: Aubrey Michelle Huie, step children: Michael G Karhan (Jamie) and Katie Karhan Amberson (Lee) and 20 grandchildren, his brother: Joseph Headden Huie (Ann), and a host of nieces, nephews and extended family. Visitation and Service will be Friday, September 11th beginning at 11am at Deerfoot Memorial Funeral Home in Trussville, AL. There will later be a private interment in Newbern, TN at the family cemetery. In lieu of flowers, the family requests you to consider donations be made in his memory to The St. Vincent’s Foundation: In Memory of John E. Huie, where donations can go directly to help during this unprecedented COVID-19 crisis. http://stvhs.com/philanthropy/ (205) 558-3850 [email protected]

John Ewing Huie, age 67, of Trussville went to be with his Heavenly Father on Monday, August 31, 2020. He was a beloved husband, father, granddad, son, brother, uncle and friend to all he knew. John was a better man than the general image we... View Obituary & Service Information

The family of John Ewing Huie created this Life Tributes page to make it easy to share your memories.

John Ewing Huie, age 67, of Trussville went to be with his Heavenly...

Send flowers to the Huie family.