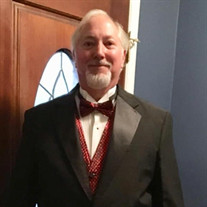 On Tuesday, October 27, 2020 John David Holladay, loving husband and father passed away at the age of 55. John was born in Birmingham, Alabama to Jerry and Pamela Payne Holladay. He attended Pensacola Junior College then finished his BA degree in Music at The University of Southern Mississippi in Hattiesburg, Mississippi. While in college, he worked as part time choir director at Purvis United Methodist Church in Purvis, Mississippi. He later went on the work at Dallas Bay Baptist Church in Soddy Daisy, Tennessee, Boynton Baptist Church in Ringgold, Georgia and New Hope Baptist Church in Pell City, Alabama. John could be described as a “jack of all trades” because he worked several different kinds of jobs to pay the bills, but his real passion was music. He sang with the worship team at his church. He loved getting together with his wife and two aunts, Mary and Ginger, to sing at family gatherings. He also sang with various choral groups through the years but his favorite and most current was singing baritone with Voices of the South, a barbershop chorus in Birmingham, Alabama and Sentimental Gentlemen, his quartet. Listen to a sample at https:/youtu.be/AG3aeeBUp9c John was preceded in death by his father, Jerry Thomas Holladay. John is survived by his wife Mickie Whitley Holladay, sons Jonathan (Stephanie) and David Holladay, granddaughter Olivia Holladay, his mother Pam Holladay, sister Maggie Davis (Greg), brother in law Buddy (Denise) Whitley, nephews Jake Davis and Joshua Whitley and niece Mary Whitley. He is also survived by a host of aunts, uncles and cousins. A memorial service will be held at Rosewood, 4156 Main Street, Pinson Alabama 35126 on Friday, October 30, 2020 at 11:00 AM. The service will be held outside to allow for social distancing. In lieu of flowers, please sent donations to Principio de Esperanza, the mission organization that we have made many trips to Honduras with. Go to principio.org. The ‘Donate’ button is at the top right hand corner of the home screen. I leave you with John’s favorite Scripture verse: “And we know that in all things God works for the good of those who love him, who have been called according to His purpose. Romans 8:28

On Tuesday, October 27, 2020 John David Holladay, loving husband and father passed away at the age of 55. John was born in Birmingham, Alabama to Jerry and Pamela Payne Holladay. He attended Pensacola Junior College then finished his BA degree... View Obituary & Service Information

The family of John David Holladay created this Life Tributes page to make it easy to share your memories.

Send flowers to the Holladay family.