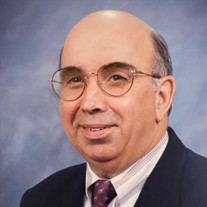 On June 6, 2021, James Edward Price entered fully into the presence of his Savior, Jesus Christ. James’ relationship with Jesus was the essential piece to his life. He served God faithfully in his home, in his church and in his community. Born in Reform, AL on January 4 1941 to Morrell and Mary Lee Price. He graduated from PICKENS County 1959; he was the class Valedictorian. He is preceded in death by his parents and older brother Gerald Price and sister Martha Price Johnson. He is survived by his sister Christine Price Maddox (Micky) and brother Randy Price. He shared his life daily with his loving wife of 20 years, Bernice. His life legacy is his children, grandchildren and great grandchildren. Sons, Stephon Price, Gregory Price (Yonna) along with Nathan Bridges (April) and daughter Tracie Rothe (Jason) that will miss his strength and wisdom. Grandchildren: Hollie, Lindsey, Stacey, Lance, Stephanie, Jacob, Hayden and Mallorie will miss his loving spirit and his sense of humor. He has 7 great grandchildren and a host of nieces and nephews that love him. He attended University of AL, receiving his degree in 1992. He worked diligently until the age of 69 and retired from O'Neal Steel in 2010. He is remembered by those he worked with as a faithful co- worker that served his job well. James had a passion for serving others; he gave of his time and talents freely and willingly. When the church lights were on, he was there serving. He believed as a child of God we should share Jesus just as much with our actions as our words. He served as a deacon at Crosspoint Church, SS teacher for Daybreak, he participated in many construction mission’s projects, organizing team member for SAM, faithfully sent cards to new members/visitors and to the sick and in need, he served in many other areas throughout his lifetime. When he wasn’t at home you would find him at his “home away from home”, Reform, AL. He enjoyed the simple life there on his tractor, in the woods, riding 4-wheelers, sharing childhood memories, sitting on the porch and experiencing joy on the farm with his cherished family and friends. He believed in building relationships and loving everyone with the love Jesus showed him. He will forever be remembered as “our Superman!” In lieu of flowers send love gifts to Crosspoint Church Construction Missions Ministry or Alabama Oncology. A celebration of his life will be held at Crosspoint Church on June 10, 2021. The family will receive visitors from 10:30am-12pm. Funeral will be at Noon with a graveside service at 3:30pm in Reform, AL.

On June 6, 2021, James Edward Price entered fully into the presence of his Savior, Jesus Christ. James&#8217; relationship with Jesus was the essential piece to his life. He served God faithfully in his home, in his church and in his community.... View Obituary & Service Information

The family of James Edward Price created this Life Tributes page to make it easy to share your memories.

On June 6, 2021, James Edward Price entered fully into the presence...

Send flowers to the Price family.