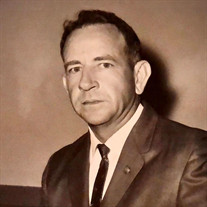 McClain, James (Jim) Audie March 5, 1923 – October 19, 2020 James Audie “Jim” McClain was born in Hamilton, AL on March 5, 1923 to Nettie (Ballard) McClain and Roy McClain. He passed peacefully on October 19th, following a brief illness. Jim graduated from Hamilton High School and attended Alverson-Draughon Business College. As a young man, he moved to Birmingham, where he began work at Stockham Valves and Fittings in 1944. Jim worked at Stockham for more than 44 years, becoming Customer Service Manager and helping to establish the company’s credit union. He was an enthusiastic participant in Stockham’s bowling league and other social groups up until his retirement. Following his retirement, Jim spent most of his time on the golf course, including the 19th hole. As a member of Trussville Country Club, he won numerous club championships and accumulated six Hole-in-One trophies. He was fortunate to have an opportunity to play at the famed Pebble Beach Golf Links, an experience that he cherished for the rest of his life. Jim was an avid fan of Alabama football, enjoying cheering for his “Crimson Tide” every game day. Jim was preceded in death by parents, three brothers, and two sisters. He is survived by his only child, Mike McClain (Brooke), grandchildren Taylor Jones and Troy Jones, great-grandson Trent Jones, and many nieces and nephews. The family would like to thank the excellent staff at Greenbriar at the Altamont, as well as Judy and Don Sharpe, for the care that they provided during Jim’s final years. You have been a blessing. A private service will be held for the immediate family at Deerfoot Memorial Funeral Home in Trussville. In lieu of flowers, the family suggests making a donation to a local food bank to support those in need.

The family of James Audie "Jim" McClain created this Life Tributes page to make it easy to share your memories.

Send flowers to the McClain family.