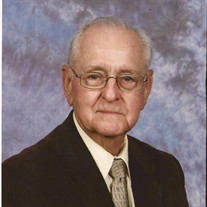 Henry Inzer Terry, age 92, of Springville, Alabama went to be with his heavenly Father on Wednesday, May 20, 2020. Mr. Terry was a WWII Veteran, received his Bachelor’s Degree from Jacksonville State University and was awarded the first Master’s Degree ever conferred from Jacksonville State University and received AA Degree from UAB. Mr. Terry was a former member of First Baptist Church of Springville where he attended and served for over 90 years. He served as deacon, Sunday School Superintendent, Sunday school teacher, Trustee, Treasurer, Training Union Director and a member of the choir. He was currently a member of Central Baptist Church. For 32 years, he was a beloved teacher, boy’s advisor and Principal in the Birmingham School System. He was preceded in death by his parents, Lawrence and Elizabeth Terry; brothers, James Terry, Charles Terry and Thomas Terry; sister, Martha Lawrence Roberts. He is survived by his wife of 54 years, Ann Hale Terry; his son, Brian Lee Terry; daughter, Lisa Terry Gurley (Wayne); grandchildren, Carly Elizabeth Stanford, Colby James Stanford, Emma Layton Terry and Tristan Wayne Gurley and numerous nieces, nephews, extended family and a host of loving friends. Graveside service will be on Friday, May 22, 2020 at 2:00 PM at Springville City Cemetery. Rev. Dewey Corder will be officiating. In lieu of flowers, donations may be made to Central Baptist Church or a church of your choice.

Henry Inzer Terry, age 92, of Springville, Alabama went to be with his heavenly Father on Wednesday, May 20, 2020. Mr. Terry was a WWII Veteran, received his Bachelor&#8217;s Degree from Jacksonville State University and was awarded the first... View Obituary & Service Information

The family of Henry Inzer Terry created this Life Tributes page to make it easy to share your memories.

Henry Inzer Terry, age 92, of Springville, Alabama went to be...

Send flowers to the Terry family.