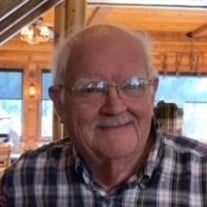 Henry Chris Bell June 18, 1943 - April 27, 2021 Passed away peacefully at home in his 78th year. Beloved husband of Mary Jo Bell. Father to David Bell (Laurie). Dear Step Father to Sonia Treadwell (Bill), Lisa New (John), Laura Vilandre (Ed). Grandfather of 2. Loved Step Grandfather to 8 and Step Great Grandfather to 6. Son of the late James Davis Bell and Lora Rose Bell (née Oliver) of Clanton, Alabama. Cherished brother to Martha Bell Jones (James) and Katherine Baker (Dick) and the late James Bell Jr. He will be dearly missed by his many nieces and nephews. Henry was born in Clanton, Alabama and attended Clanton High School. He went on to graduate with a Business Degree from Auburn University. After graduation, Henry took over his family hardware store, Bell Hardware, in Clanton until its closure. He then started his own successful business in hardware sales representing many well known businesses, traveling all over Alabama as he took over regional sales for many of these companies. He was still traveling and working these regions until his passing. He will be missed by those he worked closely with and considered friends as well as the many business owners he had built relationships with over these many years. Henry had a passion for travel and loved going out west. He and Mary Jo took many trips to Arizona, New Mexico and Colorado. He enjoyed spending time in the woods and mountains and he liked to fish. He also loved the snow. He loved Auburn Football and his dog Cricket. He very much enjoyed spending time with his buddies. Visitation and Funeral will be held on Saturday, May 1, 2021 at Deerfoot Memorial Funeral Home, 5360 Deerfoot Pkwy, Trussville, Alabama 35173. Visitation for family 9:30 – 10 a.m. with visitation open to others 10-11 a.m. Funeral service will follow in the Deerfoot Chapel from 11 – 12 p.m. Burial services will be in Clanton, Alabama at Martin Memorial Cemetery at 2pm. If you would like to donate to charity in lieu of flowers the family would like donations to be given to your local cancer society. Condolences may be given at www.deerfootmemorialfuneralhome.com

The family of Henry Chris Bell created this Life Tributes page to make it easy to share your memories.

Send flowers to the Bell family.