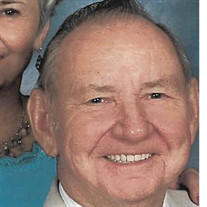 George Wallace Massey of Trussville, Alabama went to be with the Lord on August 15, 2021 at the age of 94 after battling Covid and Pneumonia. He was preceded in death by his parents, Claude Ellis Massey and Thelma M. Brown, two brothers, William Ellis (Bo) Massey, and Robert Brown. He is survived by his wife of 34 years, Nyla D. Massey. George leaves four children by his first wife Annie Mae Simmons Massey: George Louis Massey (Sharon), Patsy Massey Cannon (Rick), Claude Earl Massey (Cindy) and John Houston Massey (Hollye). He is also survived by four step-children: Patricia Smith (Bruce), David Bryars (Sonja), Scott Bryars, and Bart Byrars (Kate). In addition, there are thirteen grandchildren, a multitude of great grandchildren, and one great-grandchild on the way. He leaves behind two brothers, Gordon Massey and Earl Massey. George had accepted the Lord as his personal Savior and served Him in various ways at Lakeside Baptist, Central Baptist in Argo as a Deacon, and lastly at First Baptist Trussville. Over the years, George and Nyla traveled to Kentucky, North Carolina, Louisiana, and Mississippi on mission trips. George enjoyed doing repairs and building projects. His major employment years were as a wholesale dealer in lumber products- Walker Plywood, United Lumber, and retired as manager of Sequoia Supply in Birmingham. George was a World War II veteran, serving in the Merchant Marines and Army. He was honorably discharged in 1945 after the war ended and was always thankful for the opportunity to serve his country. On pleasant days, George enjoyed sitting on the front porch watching traffic pass and talking to people who were walking by. If you were around George much, you would have been privy to his dry wit. Service will be held at First Baptist Church Trussville on Thursday, August 19, with a visitation from 9:00 – 11:00 a.m. and a funeral service at 11:00 a.m. Interment will be at Jefferson Memorial immediately following. In lieu of flowers, the family suggests that donations be made to FBCT Library in his honor.

George Wallace Massey of Trussville, Alabama went to be with the Lord on August 15, 2021 at the age of 94 after battling Covid and Pneumonia. He was preceded in death by his parents, Claude Ellis Massey and Thelma M. Brown, two brothers, William... View Obituary & Service Information

The family of George Wallace Massey created this Life Tributes page to make it easy to share your memories.

George Wallace Massey of Trussville, Alabama went to be with...

Send flowers to the Massey family.