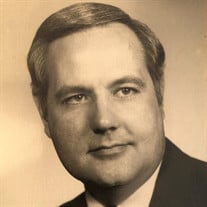 Gene Roger Hanson, age 78, passed peacefully December 6, 2020 from the effects of COVID-19. Gene was a resident of Oneonta, Alabama where he and wife Joyce enjoyed their retirement years. Gene is survived by his wife Joyce Self Hanson of 59 years and his daughter Dana (Jim Ed) Clayton, grandsons Drew (Joanna) Clayton, Kevin (Courtney) Clayton, and great-grandchildren Anjali, Sanjana, Caleb, and Rohin Clayton. He is also survived by sisters Tricia (Jerry) Bellamy, Alice (Paul) Hollis, sister-in-law Marie (Felton) Canady, brothers-in-law Charles (Betty Anne) Self, and Vann (Sharon) Self, as well as a host of nieces and nephews, and all who affectionately called him “PawPaw.” He was preceded in death by parents Lumas Bertrum Hanson and Ella Cheatum Lockhart Hanson, sister Elaine Phillips, brother Franklin Hanson, grandson Wesley Frazier Clayton, and his beloved son Frank Eugene Hanson. Born November 17, 1942, he grew up in Pinson where he attended Pinson's Rock School and was a 1961 graduate of Hewitt-Trussville High School. He married the love of his life Joyce Self on September 9, 1961. They welcomed their special son Frank Eugene Hanson into the world on March 24, 1962. Frank passed away on August 28, 2020, also from the effects of COVID-19. Gene spent his life loving and attending to the special relationship that he and Frankie enjoyed until the very end. Gene ultimately lovingly gave his life for Frank, having helped care for Frank during his illness. Gene was employed with the Birmingham Water Works Board for 36 years. He began his career in the drafting room where he advanced to chief draftsman. His drawings and maps were still being used upon his retirement in January 2000. While working a full-time job and raising a family, he attended night school and earned his associate degree from Jefferson State Junior College and his BS in Engineering from UAB, then attained his Professional Engineer certification. He was honored to be inducted into the Tau Beta Pi honorary society. He served as the Water Works General Manager and Chief Operating Officer. At his retirement, a resolution was adopted in appreciation of his leadership, stating in part: “Mr. Hanson enjoyed the highest reputation of honesty, integrity, and impartiality among his peers”. Gene was a member of many professional organizations including the American Water Works Association where he served as a Director and the Alabama/Mississippi Section Chair. He served on the National Standards Council and he was recognized for his leadership by being honored with the Fuller Award. He was especially fond of the BWWB tapping team that participated at annual meetings. He cheered them on and bragged of their accomplishments often. Gene served in many ways throughout the communities in which he lived. He was generous with his time and resources. He was a valued leader in Clay United Methodist and Lester Memorial United Methodist churches. His keen attention to financial and organizational details was valued by all. If you were around him for more than a few moments, Gene considered you a friend and would often tell you about his family. His love for his children, grandchildren and great-grandchildren was the passion of his life, followed closely by Alabama football and playing golf with friends. Gene leaves a legacy of love to all who knew him. He left us too soon, but this world is a better place because of Gene’s life. The family wishes to express their deepest appreciation to the medical team at UAB Hospital, who cared for Gene heroically during the 92 days he battled COVID-19 in the hospital. Their courage and compassion is unparalleled. The family celebrated the lives of Frank and Gene with a private ceremony and burial at the Clay United Methodist Cemetery on December 10, 2020. In lieu of flowers, the family of Frank and Gene request donations be made in their memories to: the ARC of Jefferson County (6001 Crestwood Blvd.; Birmingham, AL 35213); the Blount County Children’s Center (PO Box 906; Oneonta, AL 35121); or Water for People (100 E Tennessee Ave.; Denver, CO 80209). There will be a memorial service for friends and family when it is safe to have a gathering.

Gene Roger Hanson, age 78, passed peacefully December 6, 2020 from the effects of COVID-19. Gene was a resident of Oneonta, Alabama where he and wife Joyce enjoyed their retirement years. Gene is survived by his wife Joyce Self Hanson of... View Obituary & Service Information

The family of Gene Roger Hanson created this Life Tributes page to make it easy to share your memories.

Send flowers to the Hanson family.