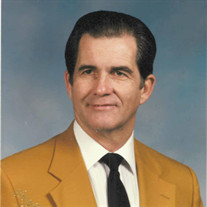 Gary Lee Smith, 85, of Birmingham, Alabama passed away Tuesday, August 17, 2021 in Pell City, Alabama. He was born on July 20, 1936 in Birmingham, Alabama to Isaac V. and Beatrice Cox Smith. Gary attended Woodlawn High School where he sang in the Warblers and played football. He went on to play football for Sewanee and also attended Howard College. Gary met and married the love of his life, Frances, in 1956. He loved his Lord and cherished his entire family with a remarkable faithfulness and intensity all the days of his life. Everyone who knew him always comments on his genuine interest in each person he met. “Pop” will be deeply missed by all his family and friends. As a real estate broker, Gary and his wife Frances owned and operated three Century 21 Real Estate offices in the Birmingham metropolitan area. In 2001 he followed his dream and moved to Logan Martin Lake, where he enjoyed many more years of real estate at Fields Gossett Realty. Gary loved fishing, water skiing, building projects and gardening - always growing enough tomatoes to share with the neighbors. As a former football player, he particularly enjoyed following the football careers of Woodlawn graduates and Alabama natives from the 1950’s to the present. He joined Ridgecrest Baptist Church in 1964. He faithfully taught Sunday School, worked with the bus and youth ministries, taught adult literacy and served on many committees. His passion was to support missions in every way possible, including domestic and trips abroad. Gary is survived by his loving wife of 65 years, Frances Hargrove; his daughter, Teri Lynn Smith; his son, Gary Alan Smith (Yulia); his four grandchildren, Loni April Smith and her children (Madelyn, Isaiah and Moses); Lana Aubrey Smith Clark (Clayton) and their children (Camella, Kellen and Corrie); Chase Isaac Smith (Morgan Deann) and their children (Anna Rose, Ada Lynn and Joseph Lee); Caleb James Smith (Meghan Sanders). He is also survived by his sister Mary Lou Smith Kirk (Guy C. Kirk, Jr. dec.) and their children (Guy III, Cindy, Brian and their families); and by his first cousins Larry and Don Weaver and their families. Visitation will be at Deerfoot Memorial Funeral Home on Saturday, August 28, from 10:30 to 12:00 followed by the Memorial Service at 12:00 pm. The Internment will be at Jefferson Memorial Cemetery in Trussville, Alabama.

The family of Gary Lee Smith created this Life Tributes page to make it easy to share your memories.