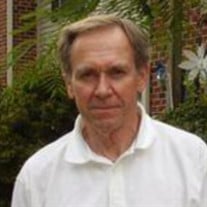 Edward Francis Hart, beloved father and grandfather, went to be with the Lord on Saturday, August 14th, 2021, after a decades-long battle with Parkinson’s disease. Ed was born on December 7th, 1940 to William and Edytha Hart and grew up in Patchogue, New York. Ed graduated from Davis and Elkins College in Elkins, WV, where he received his degree in Physical Education. While in college, he played baseball as the starting varsity catcher, and was a member of Sigma Phi Epsilon fraternity. He subsequently served his country in the U.S. Navy and was honorably discharged to the Naval Reserves in 1964. He was a P.E. teacher before beginning a career in sales with DuPont and later with Arch Enterprises. An avid sports fan, Ed particularly enjoyed all things baseball, playing golf, and watching Alabama football. Ed was a long time member of Hunter Street Baptist Church, was active in Toastmasters, and served with the ARC of Jefferson County. Ed was preceded in death by his father, William; his mother, Edytha; his brother, Bill; and his daughter, Sarah. He is survived by his four living children: Ed, Cliff, Jim and Debbie, as well as nine grandchildren: Jon, Liz, David, and Richard Hart; Sterling, Campbell, and Emerson Hart; and Harper and Avery Wilbourn. Services will be held at Deerfoot Memorial in Trussville, Alabama on Saturday August 21, 2021 with a Visitation from 10am-11am and a Chapel Service at 11am. A Graveside & burial ceremony will follow at Jefferson Memorial Funeral Home and Gardens. In lieu of flowers, donations can be made in his honor to the Parkinson Association of Alabama (https://donorbox.org/parkinson-association-of-alabama-2)

Edward Francis Hart, beloved father and grandfather, went to be with the Lord on Saturday, August 14th, 2021, after a decades-long battle with Parkinson&#8217;s disease. Ed was born on December 7th, 1940 to William and Edytha Hart and grew... View Obituary & Service Information

The family of Edward Francis Hart created this Life Tributes page to make it easy to share your memories.

Send flowers to the Hart family.