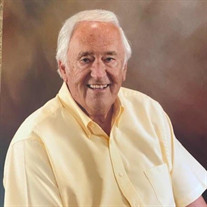 Edgar Marvin Fritz, Jr. (Buddy), passed away on Saturday, April 25th at the age of 87 with family members by his side. Marvin was born and raised in Birmingham, Alabama, and graduated from Woodlawn High School in 1951. After serving in the U.S. Navy for four years, he joined Alabama Power Company where he spent 45 years supporting their Print Shop, eventually becoming its Supervisor. Three weeks after retiring from the Power Company, Marvin went to work for American Promo where he continued to work until he passed away. Marvin did not like to sit still. He also never met a stranger. Both careers allowed Marvin to serve and give back to others in a way that will not be quickly forgotten. Marvin was an avid golfer (an understatement) and was a member of Grayson Valley Country Club for the last 38 years. He also coordinated many charity golf tournaments while he worked for Alabama Power including the annual United Cerebral Palsy of Alabama. tournament which he headed up for many years. Marvin is often described as a mentor, a friend; someone you could always count on. He was an active member of First Baptist Church of Trussville. When not on the golf course, he loved going to the beach, attending family reunions, and supporting his grandchildren in their various activities. Marvin leaves behind his beloved wife and best friend of seven years, Carol Y Fritz, brother, John Fritz (Beverly), Vestavia Hills, sister Lynn Williams, Quinton; sons Dean Fritz, (Janet Lynn), Birmingham; Ken Thompson (Michelle) of Panama City Beach, FL; Steve Thompson (Lynn) and Grant Thompson (Gina), both of Trussville; Jimmy Richardson (Tracey), Moody; Bart Yarborough (Amy), Helena and two daughters, Becky Sharp (Richard) of Fredericksburg, VA. And Staci Y Ragsdale of Helena. Marvin was preceded in death by his parents, Marvin Fritz, Sr. and wife, Evelyn, sons, Keith Fritz and Jay Fritz and by his wife of 30 years, Wanda Mae Fritz. He also leaves behind many grandchildren, great-grandchildren, cousins, nieces and nephews as well as countless friends and co-workers. There will be a small graveside service for immediate family this Saturday, May 2nd, 2020. A Celebration of Life service will be held on Thursday, June 18, 2020 at 10:00 AM at First Baptist Church of Trussville.

Edgar Marvin Fritz, Jr. (Buddy), passed away on Saturday, April 25th at the age of 87 with family members by his side. Marvin was born and raised in Birmingham, Alabama, and graduated from Woodlawn High School in 1951. After serving in the... View Obituary & Service Information

The family of Edgar Marvin Fritz Jr. created this Life Tributes page to make it easy to share your memories.

Send flowers to the Fritz family.