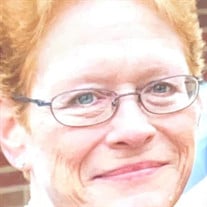 DIANE “DEE” NIXON January 17th, 1959- February 13th, 2022 Diane was born in Binghamton, NY, and raised in Hallstead, PA where she attended the Blue Ridge School District. She married her first husband, Timothy Luce, with whom she had two children, Zachary Paul and Sarah Louise. She was heavily involved in Standfordville Baptist Church, and also enjoyed being “team mom” for Zachary’s little league baseball team. She lived in PA, NY, OR, NC and finally AL where she would live out the remainder of her life. She sold Avon for 21 years while she was working her full-time jobs. Throughout her years of living in many states and having various jobs, she met so many co-workers and customers that became lifelong friends. She was one of the most selfless people you could ever meet. She put everyone else’s needs above hers. Many friends and family were not aware of her health condition, and that was her wishes. She didn’t want anyone to worry about her. Even in her last week, she was concerned with the wellbeing of others over herself. She was so generous, kind, caring, considerate and quick witted with an unmatched retort. She could make the grumpiest person around chuckle with just one line. She had a personality that could light up the room, and no other person could replace the sarcasm and humor she possessed. She loved word games, reading a good book, and spent time daily sitting outside enjoying a good crossword puzzle. She fought as hard and as long as she could to be here for her friends and family, but unfortunately lost her battle with cancer on Feb. 13th. She is preceded in death by her father and mother, James and Barbara Caswell, and her second husband Wayne Nixon. She is survived by her sister, Debra (Ron) Roeder. She is also survived by her children, sons, James I. Caswell & Zachary Luce, and daughter, Sarah (Jeremy) Walker, and her granddaughters, Kyla and Lauren Caswell. She is also survived by 3 uncles, 4 aunts, several cousins, nieces, nephews, and many great-nieces and nephews whom she loved dearly. In addition, let us not forget the many “children” and “grandchildren” that she adopted in her heart over the years. She will be missed more than she will ever know, and she touched more hearts and minds than she realizes. We are thankful for all the wonderful and priceless memories. Her services will be held on March 19th, 2022 @ 11am, at New Lebanon Baptist Church in Odenville, AL. In lieu of flowers, please make donations to St. Jude’s Children’s Hospital in her name.

The family of Dianne Nixon created this Life Tributes page to make it easy to share your memories.

Send flowers to the Nixon family.