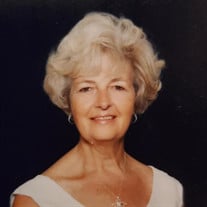 Vivian Diane Wigley Leopard, known to most as Diane, known by some as Wiggle, and known by her beloved family as Nana, slipped away from her earthly body into the arms of Jesus on Wednesday, April 27, 2022, at the age of 75. Diane is currently a member of First Baptist Church, Trussville, Alabama. Diane was born in Fort Payne, Alabama on November 7,1946 to the late Bill and Mildred Wigley. She lived in Fort Payne, and Buffalo, New York as a child, and eventually moved to Springville, Alabama at a young age, where she met her sweetheart, and future husband, Donald Leopard. Diane and Donald started “going steady” when they were in 8th and 9th grade, respectively, and have been married for almost 58 years. After several years of being a homemaker, Diane had several different jobs, and even opened the Sweet Treats bake shop with her good friend, Linda Lee. In 1988, Diane began working at Wood Fruitticher grocery company. During her 20 years at Wood Fruitticher, Diane worked with institutional sales, was very successful, and loved her job, and the many friendships made there. She retired in 2008. Diane had many different hobbies, but her favorite hobby was sewing and making quilts for her family. Another favorite pastime for Diane was volunteering as a lightkeeper at Cape Lookout Lighthouse National Park, where she and Donald served at times for 6 years. Diane served on many church committees at Springville First Baptist Church, including two of her favorite committees, the Senior Adult Group, and coordinating the Annual Widow’s Banquet. She was always petitioning in prayer on behalf of those in need. Diane was preceded in death by her parents, Bill and Mildred Wigley. Diane leaves behind many family members, which she lovingly referred to as her “blessings:” husband, Donald Leopard, sister, Judy Headrick (Frank), children, Don Leopard (Mona), Rod Leopard (Shelley), Kim Searcy (Stephen), and Kelly Leopard (Michelle). Grandchildren, Cason (Jessica), Wil (Katie), Dylan (Amanda), Lynsey, John, and Joshua Leopard, and Zach (Sarah), Isaac (Michelle), and Luke (Abby) Searcy, great grandchildren, Harper, Isaac, Preston, Micah, Millie, and Jude. There will be a visitation for Diane on Monday, May 2, 2022 from 5-7pm at Deerfoot Memorial Funeral Home. There will be an additional visitation at First Baptist Church Trussville on Tuesday at 10am, followed by a memorial service at 11am. A graveside service will follow at 3:30pm on Tuesday at Walkers Chapel Cemetery in Fort Payne. Deerfoot Memorial Funeral Home is in charge of arrangements, officiated by Revs. Mike Shaw, Buddy Champion, and Keith Wrenn. Pallbearers will be the grandsons.

Vivian Diane Wigley Leopard, known to most as Diane, known by some as Wiggle, and known by her beloved family as Nana, slipped away from her earthly body into the arms of Jesus on Wednesday, April 27, 2022, at the age of 75. Diane is currently... View Obituary & Service Information

The family of Diane Wigley Leopard created this Life Tributes page to make it easy to share your memories.

Vivian Diane Wigley Leopard, known to most as Diane, known by...

Send flowers to the Leopard family.