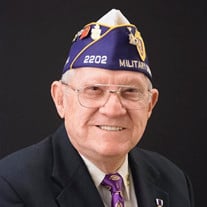 The Rev. David Millard Cox of Pell City, Alabama, passed away peacefully on August 16, 2021, at age 96. David was preceded in death by Irene Nichols Cox in 2000, and is survived by two married daughters, Carolyn Sexton, husband Thomas Sexton (deceased), and Pamela Jarvis, husband Michael Jarvis, all residing in Springville, Alabama. His family spanned five generations and includes seven grandchildren, fifteen great-grandchildren and nine great-great-grandchildren. Born in Pineville, Kentucky, he enlisted in the U.S. Navy at age 17 after marriage to Irene, and subsequently was part of the invasions of Iwo Jima and Okinawa in the Pacific. He was awarded the Military Order of the Purple Heart for a wound sustained during combat at Okinawa. After surviving the war, he began his lifelong calling to missionary work, traveling to numerous countries across the Middle East, Far East, Africa and South America. He pastored at ten churches in the eastern United States during his lifelong tenure as a minister in the Nazarene and United Methodist churches. David had a love for higher education and attended seminary and graduate schools at Olivet, Duke, and Gettysburg. He was active in scouting and youth sports throughout his lifetime, loved a good game of golf, and was an avid collegiate sports fan. _______ The family will receive friends at Springville First United Methodist Church, 6471 US Hwy 11, Springville, AL 35146, at 10:00 AM, Saturday, August 21, with a Memorial Service immediately following (11:00 AM) at the same location. Interment will follow at the Low Gap United Methodist Church Cemetery, 5000 County Road 12, Odenville, AL 35120. Flowers can be sent to Deerfoot Memorial Funeral Home, 5360 Deerfoot Parkway, Trussville, AL 35173. Donations may also be sent to the Wounded Warrior Project in memory of David Cox at: https://support.woundedwarriorproject.org

The family of Rev. David Millard Cox created this Life Tributes page to make it easy to share your memories.

Send flowers to the Cox family.