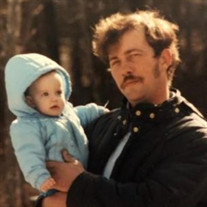 David Lawrence Cockerham, 65, passed away May 15, 2021 in Birmingham, Alabama. He was born in Irondale, Alabama on September 18, 1955. David spent his career as an inspector for Energen Gas Company and was a lifelong volunteer fireman. His love for his community was unparalleled and his life was a testament of that love. David was a master storyteller and would make you feel as if you had experienced the story yourself! He was an avid outdoorsman and an incredibly gifted teacher. He loved to share the outdoors with anyone that wanted to experience the wonder of God’s creation. David was the first one to step up when someone needed any help. He never expected anything in return, (unless you were trading fishing tackle) and it is clear that the joy of giving was his gift. His life will be remembered because he lived in such a way that he preached the Gospel without uttering a word, even though he was definitely not short on words. David was preceded in death by his parents, Benjamin and Mary Ruth Cockerham, and his grandson, Hunter Jones. He is survived by his wife, best friend, and partner of 24 years, Brenda. He was a loving father to children to Lance (Christian) and Rebecca. He later stepped in to share his fatherly love with Don Thompson and Tara Jones (Tommy). He was brother to Benny Cockerham and Jane Marshall. He also loved Donald Erwin as a true brother. He was grandfather to Nina Rodriguez, Lexi Rodriguez, Mary Ella Cockerham, John Paul Cockerham, Max Bohannon, Seth Bohannon, Brent Jones, LaDona Thompson, Alex Thompson, Dakota Thompson, Dylan Courts and four great-grandchildren. He had more friends than sands on the shore. David will be honored with a celebration of his life on Wednesday, May 19, 2021 with visitation from 12:00-1:00 and a service at 1:00 at Union Methodist Church of Chelsea Parks in Wilsonville, AL. Burial to follow at Forrest Crest Cemetery in Irondale, AL. When you think of David, smile and simply perform an act of kindness in his honor, just as he would have done. “And do not forget to do good and to share with others, for with such sacrifices God is pleased.” Hebrews 13:16 NIV

David Lawrence Cockerham, 65, passed away May 15, 2021 in Birmingham, Alabama. He was born in Irondale, Alabama on September 18, 1955. David spent his career as an inspector for Energen Gas Company and was a lifelong volunteer fireman. His... View Obituary & Service Information

The family of David Cockerham Sr. created this Life Tributes page to make it easy to share your memories.

Send flowers to the Cockerham family.