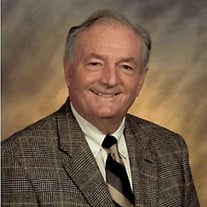 Clifford Dewey Corder went to be with the Lord on December 25, 2020. Dewey was an ordained minister for over five decades and spent most of his career serving in six different congregations within the state of Alabama. He was born and raised in Memphis, Tennessee, the oldest of four children. Dewey felt the Lord’s call to ministry when he was age sixteen. He received a bachelor’s degree from Union University and graduated from The Southern Baptist Theological Seminary in Louisville, Kentucky with a Master of Divinity. In 1960, Dewey met his wife, Jackie Legge, at Maplewood Baptist Church while home from college. They married in September of 1962 and began 58 years of ministry together. Dewey first served as an associate pastor for First Baptist Church of Opelika followed by his first full-time pastorate at Abbeville First Baptist Church. Dewey’s second longest tenure began in 1971 where he and Jackie served Golden Springs Baptist Church in Anniston for ten years. While there, Dewey was instrumental in establishing the Carpenters for Christ construction ministry. Dewey was later called to Eastern Hills Baptist Church in Montgomery where he served for seven years. In 1989, Dewey accepted a call to First Baptist Church of Trussville. While there, Dewey was elected President of the Alabama State Baptist Convention for two consecutive terms. He was honored to serve in this role which also allowed him to be the chairman of the State Board of Missions. Dewey’s last sermon was delivered from Central Baptist Church in Argo, where he was honored to be serving for the last 24 years in both a bi-vocational and full-time capacity. Dewey, Jackie, Chris, and wife Sophie established Wings of Eagles retreat ministry in Blount County, Alabama in 1999. Wings of Eagles served children through senior adults for the next eighteen years. This property is still being used for ministry today. Dewey enjoyed the outdoors in all forms. He enjoyed fishing, hunting, golfing, and gardening. He was an avid sports enthusiast and often referenced these hobbies in his messages. Above all, Dewey was most excited when sharing about Jesus and being given the opportunity to point a person to Christ. Dewey is survived by his beloved wife, Jackie Corder; his three children Chris Corder (Sophie), Cori Hallmark (Edward), and Casey Corder (Ashley); his grandchildren Abbi Phillips (Logan), Caleb Corder, Will Corder, Hailey Hallmark, Millie Hallmark, Avery Corder, and Beau Corder; his sister Linda Bickel and family, brother Joe Corder and family, and sister Jan Christensen and family. Dewey is preceded in death by his parents, Joseph Corder and Winifred Corder. Visitation for Dewey is Saturday, January 2, 2021 from 10:00AM-2:00PM at First Baptist Trussville with the service following at 2:00PM. A private family burial will follow at Central Baptist Cemetery with Gary Fleming officiating.

Clifford Dewey Corder went to be with the Lord on December 25, 2020. Dewey was an ordained minister for over five decades and spent most of his career serving in six different congregations within the state of Alabama. He was born and raised... View Obituary & Service Information

The family of Clifford Dewey Corder created this Life Tributes page to make it easy to share your memories.

Clifford Dewey Corder went to be with the Lord on December 25,...

Send flowers to the Corder family.