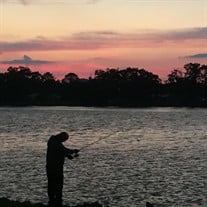 Trussville - Claude Steven “Steve” Webster passed away on January 27, 2020 in Ashville, Alabama. Steve was born in Mobile, Alabama on February 16, 1956. Steve graduated from Baker High School and attended the University of South Alabama. Steve is survived by his wife, Becky, his three children, Joseph Webster (Ashley), Whitney Webster and Ben Webster, and his sister, Gloria. Steve met Becky while at school in Mobile. They were married in Trussville and settled down in Mobile where they later welcomed their three children. They eventually moved to Becky's hometown of Trussville. They spent most weekends at their lakehouse on Neely Henry where they enjoyed boating and fishing. Steve was diagnosed with Parkinson’s Disease in 2008 and strongly lived with the disease. He never allowed the disease to hold him back from being a loving husband and father and doing what he loved - fishing and playing the drums. Those that knew him, knew he was an avid freshwater fisherman and loved any opportunity to get out on the lake. The family requests that in lieu of flowers, donations in memory of Steve Webster be made to UAB Medicine for Parkinson’s Research. Please make checks payable to: UAB Medicine, and mail to: “UAB Records, AB 1230, 1720 2nd Avenue S, Birmingham, AL, 35294” or make a gift online at: https://securelb.imodules.com/s/1881/giving19/interior.aspx? sid=1881&gid=3&pgid=881&cid=2116. Visitation will be at Deerfoot Memorial Funeral Home on Thursday, January 30, 2020, from 6:00-8:00 pm and then a Memorial Service at Deerfoot Memorial Funeral Home on Friday, January 31, 2020 at 11:00 am, 5360 Deerfoot Parkway, Trussville, Alabama 35173.

The family of Claude Steven "Steve" Webster created this Life Tributes page to make it easy to share your memories.

Send flowers to the Webster family.