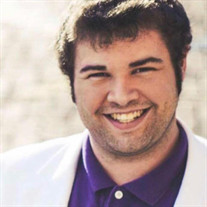 Christopher Rex Pattillo, born August 26th 1994 in Montgomery Alabama, sadly and unexpectedly left us on the morning of Saturday, January 4th, 2020 in Birmingham, Alabama. Christopher had a larger than life character and personality that served him well as a child and into adulthood. He had a passion for the arts and learning which he managed to combine with a Bachelor's degree at the University of Montavello. His achievements were not confined to college, he embraced the church and became an ordained minister and actively participated in politics at local and state level. He embraced college life to its fullest and such was his reputation that he was employed by the University as an Admission Assistant after his graduation. He will be best remembered for his combination of mischievous antics and his eloquent and comforting nature. For those that were lucky enough to receive one, his big big bear hugs will never be forgotten. Christopher is preceded in heaven by his grandfather, Wesley Stokes and his great grandfather, Frank Matteo. He is survived by his mother, Cindy Tipton and husband, Bill Tipton and stepsister, Jordan Tipton; his grandmother, Linda Stokes; great grandmother, Ruth Matteo; his great aunts, Marilyn Summerville and Tami Cooper, husband Eric Cooper (Zach and Maddie); his aunt, Teri Ward and Husband John Ward; loving cousins, Joel and Kayla Huffman, (Laiken, Tyde and Harbor); Jessica and Daniel Bailey, Dani Sue and Steven Huffman, Ashley, Isaac and Masha, Denise and Eddie Wright, (Mia and Maci).

Christopher Rex Pattillo, born August 26th 1994 in Montgomery Alabama, sadly and unexpectedly left us on the morning of Saturday, January 4th, 2020 in Birmingham, Alabama. Christopher had a larger than life character and personality that served... View Obituary & Service Information

The family of Christopher Rex Pattillo created this Life Tributes page to make it easy to share your memories.

Send flowers to the Pattillo family.