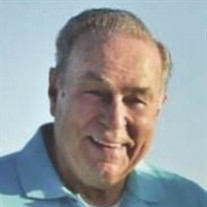 Charles Earnest Dickey, 81, of Trussville, Alabama passed away on Thursday, December 3rd, 2020. He was born in Savannah, Georgia, the third child of the late Lawrence Junius Dickey, Jr. and Helen Lanell Mincey. He was predeceased by his brothers Percy Howard Dickey and Lawrence Dickey and sisters Frances Lutzewitz and Patricia Scott. He was firmly devoted to his family, friends, and church family. In 1960, he was married to Patricia (Bryant) Dickey, and they were fully devoted to each other for 58 wonderful years before her passing in December 2018. Together they produced five children, fourteen grandchildren, and six great-grandchildren, all who lovingly referred to him as “Gedaddy.” No matter how big the family got, every one of them received a beautiful hand-written poem from Gedaddy on their birthday and anniversary – words they will treasure forever. The righteous man walks in his integrity. His children are blessed after him. Proverbs 20:7 His tremendous legacy is reflected through the lives he has touched over the years not only as the patriarch of his family but also as an elder and youth coordinator in his church for over 42 years. Many of the youth group still to this day look at him as a father figure. He was the epitome of a godly man, husband, father and friend and was a perfectly balanced mixture of strength and gentleness. He always had a big smile on his face, and when you asked him how he was doing, his favorite response was “I’m gooder than grits, but not near as grainy!“ If he said that, you knew he was having a good day – which was most days! Charles was married to Ruth Artis Bailey on January 4, 2020. They were blessed to find love after both losing their spouses. He leaves his wife Ruth Dickey; his son Steve (Karen) Dickey; son Tim (Lisa) Dickey; daughter Regina (David) Horvath; daughter Rhonda (James) Hindman; son Brian (Julie) Dickey and step-son Billy (Caryl) Bailey. He also leaves his fourteen grandchildren and six great-grands, as well as several nieces, nephews and other extended family. A private graveside service with the family will be held at 12:00 p.m. on Tuesday, December 8th, 2020. Precious in the sight of the LORD is the death of his faithful servants. Psalm 116:15. If you wish to send flowers please send to Deerfoot Memorial Funeral Home by 11 AM on Tuesday, December 8, 2020.

Charles Earnest Dickey, 81, of Trussville, Alabama passed away on Thursday, December 3rd, 2020. He was born in Savannah, Georgia, the third child of the late Lawrence Junius Dickey, Jr. and Helen Lanell Mincey. He was predeceased by his brothers... View Obituary & Service Information

The family of Charles Earnest Dickey created this Life Tributes page to make it easy to share your memories.

Send flowers to the Dickey family.