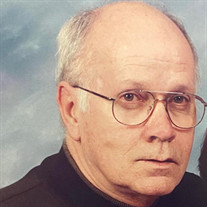 Bruce Alan Thompson - known to most as Butch - left this world the morning of Monday, March 30, 2020 without warning. Thank you all for your thoughts and prayers. They are truly felt and are sustaining us through these rough waters. Butch grew up in Trussville, Alabama, graduating from Hewitt Trussville High School in 1961 with his dog, Rip, by his side. His love of dogs followed him throughout his life. He grew up in Andy’s garage working on cars and under the sun in the pits at the races. He devoted his pattern making career to USCO Power Equipment Corporation for 31 years before retiring. After retirement, he dedicated his time to his family. We met in 1963 and were married for 56 years. What an honor it was to be his wife; to watch his heart soften and grow with each new generation. He was not a man of many words but when he spoke, you listened because he was wiser than his years and one of the most intelligent people to walk this earth. If something was broke, you know Butch would fix it. He could often been seen in the community on his daily walk with his dogs or checking in with his neighbors. He did not say, “I love you,’ often but showed you through his actions - we have no doubt how much he loved us all. Bruce was proceeded in death by his mother, “Mama,” Gladys Powell Thompson; Survived by his wife, DiAn Higdon Thompson; their dog, Millie; his four children, Kathy (Mike) Fulmer, Patty (Joe) Davis, Bryan (Leslie) Thompson, David (Sally) Thompson; his grandchildren, Jessica (Tommy Gilreath) Robinson, Amanda (Jacob) McCurdy, Randi (Josh Avant) Miller, Zac Thompson, Autumn Thompson, Gray Thompson, Lucas Thompson; his great-grandchildren, Austin Miller, Michael Johnson, Cade Miller, Mia Avant, Peyton McCurdy; his brother, Louis James (Kay) Thompson; his niece, Phyllis Smith; his great niece, Kalei Graham; and honorary family, Andy & Mary Ann Vann, and the family of Phillip & Shirley Dunaway. In his younger days, his friends called him “Ambrose,” meaning immortal, to live forever - and he will. There won’t ever be another one like him. We thank God he was ours.

Bruce Alan Thompson - known to most as Butch - left this world the morning of Monday, March 30, 2020 without warning. Thank you all for your thoughts and prayers. They are truly felt and are sustaining us through these rough waters. Butch grew... View Obituary & Service Information

The family of Bruce Alan Thompson created this Life Tributes page to make it easy to share your memories.

Bruce Alan Thompson - known to most as Butch - left this world...

Send flowers to the Thompson family.