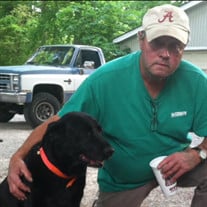 Billy Pounds, Sr., 80 years old, of Birmingham, joined his Heavenly Father on Wednesday, September 1, 2021. He passed away at St. Vincent's East after an extended illness. Billy, Sr. was born in Eupora, Mississippi, Webster County, on December 9, 1940, to E.B. and Burnice Pounds. He married Ann C., the love of his life, in 1960, and she survives him. Billy, Sr. is also survived by his best friend and son, Billy Pounds, Jr., (brother and sister-in-law) Don and Gloria Pounds, (sister) Sharon Pounds, and (his best friend), Tom Powers. He loved all of his animals but loved his sweet dog, Gracie, the most. Being a kind and dependable father was of the utmost importance to Billy, Sr. and he certainly did not disappoint when it came to loving his family, Billy left a void in our family that will never be filled. He worked at CB&I for 23 years and then became the successful owner of Pounds Construction for 20 years, but his favorite job was working for the last 13 years of his life as the manager of Southern Skeet and Trap Club. Not only did he love the outdoors but he was passionate about helping others. In his younger days, he loved dirt bike riding and as he got older that led to jeep riding and fishing out of his canoe on the Cahaba River and on small farm ponds. He also regularly loved fishing and hunting, but his preferred pastime was duck hunting with his dog Gracie and one of his many friends, Tom Powers. His ideal thing to do was to talk with his numerous friends at the Southern Skeet and Trap. He loved hearing about their families and sharing funny stories. Among many of his doctor friends that came to the club, Dr. Bob Morris and Dr. Brian Snoddy were two of his most enjoyable shooting buddies. He was a loving and devoted father and husband, a friend to everyone he met, and one of the most unselfish men you would ever know. What is the measure of a man? Is it the amount of money he has? The possessions he owns and the power he holds? Is it the professional success he’s achieved over the years? The true measure of a man is how much love he gives; how selflessly he shares whatever he can to help others; how consistently he lifts up those around him with a kind word, a funny joke, a compliment, a humble ear, or the very shoes off his feet. By this measure, Billy was immeasurable.

The family of Billy B Pounds SR created this Life Tributes page to make it easy to share your memories.

Send flowers to the Pounds family.