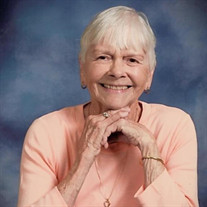 Mama. Nana. Wife. Friend. Those are just some of the titles Bettye Anne Wallace was known by in her life. Born to Lillian and James Wright on January 26th, 1938 (you do the math) in Decatur, Alabama she attended Decatur High School where her cute figure in her majorette uniform caught the eye of a certain trombone player. She married that trombone player, Marion Lee “Bebee” Wallace on June 29th, 1957 and after Bebee graduated from the University of Alabama in 1960 with stints in Little Rock, AR; Baton Rouge, LA; Birmingham and back to Decatur, the family finally landed in the little village of Springville in 1965. This became Bettye’s home for the next 55 years! She was a school mom, band mom, cheerleader mom, basketball mom, UMYF mom. She was a devoted member of the Springville United Methodist Church especially the choir, her Sunday School and not least of all the United Methodist Women where she was a proud “Sew and Sew.” She was a supporter of the Springville Community Theater and was a founding member and fundraiser for the Springville Preservation Society. And she especially loved her friends, progressive rummy card parties, The Pool in the Woods, extended family adventures to Fort Walton, Gatlinburg and her girlfriend trips to Gulf Shores…. Bettye was preceded in death by her husband, Bebee; her son, David; and her grandson, Nick. She is survived by her son, Andy (Martin) of Birmingham; her daughter, Lee Anne and her son, Mitch (Judy) of Springville and her daughter, Julie (Ken) of Shippensburg, PA. She is also survived by her precious grandchildren, Briget of Moundville; Jared of Lacey, WA; Ashley of Haifa, Israel and finally, Jacob and Jesse of Shippensburg, PA. She was the GREAT grandmother to her, count ‘em, 11 great grandchildren: Julia, John David, Jackson, Ashtyn, Payton, Liam, Parker, Tyler, Riley, Kinsley and Dylan. There will be a private family graveside service in the Springville Cemetery. Later, when folks can gather safely together, the family is planning a hum-dinger of a celebration honoring our Mama’s awesome life. You won’t want to miss it!!!! In lieu of flowers, our Mama would suggest donations to the Children’s of Alabama Pastoral Care Dept., 1600 7th Avenue South, Birmingham, AL 35233; Breast Cancer Research Foundation of Alabama, 1802 6th Avenue South, Birmingham, AL 35294 or the Springville United Methodist Church, 6471 US-11, Springville, AL 35146. Unable are the Loved to die, For Love is Immortality. -Emily Dickinson

Mama. Nana. Wife. Friend. Those are just some of the titles Bettye Anne Wallace was known by in her life. Born to Lillian and James Wright on January 26th, 1938 (you do the math) in Decatur, Alabama she attended Decatur High School where her... View Obituary & Service Information

The family of Bettye Anne Wallace created this Life Tributes page to make it easy to share your memories.

Mama. Nana. Wife. Friend. Those are just some of the titles Bettye...

Send flowers to the Wallace family.