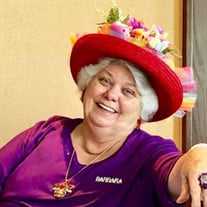 Barbara J. WIdeman Daughter of Jack Harris, A decorated WWII Veteran and Louise Harris. Barbara sadly passed away on September 15, 2021 at the age of 72. She was Born Febuary 24, 1949 in Birmingham, AL. She attended Banks High School where she played the clarinet in the marching band. She gave birth to two daughters. Denise on October 30, 1968 and Carolyn on June 20, 1978. She became a resident of Ashville, AL in the late 80's and raised 3 generations in the community. Once she saw the joy in becoming a mother, she knew it was her calling. After losing her oldest daughter Denise in 1999, she took on the duty of being a mother again and raised her two grandson's Justin and Jesse as if they were her own. She was always involved and made sure the boys were in every extra curricular activity that she could find for them. She made sure the boys were always surrounded by good people and a strong faith in God so she became a member of The First Baptist Church in Ashville. In 2009, when the boys moved out, she bought a home and land outside of shoal creek and moved in her daughter Carolyn with her children Dakota, Jonathon, Adrianna, & Victoria and again answered her calling by helping raise them. She lived for being a "beauty pageant mom" early on with Victoria and volunteered all of her time into the things her grandchildren loved to do. Whether it was as a member of the quarterback club, the band boosters, or just giving her time to anyone in the community that needed it, she was a stranger to noone. Barbara was the backbone of her family, she lived her life to the tune of everyone elses laughter and happiness as she was always the most selfless and dependable person in the room. She did for others and never cared for anything in return. She has touched a lot of lives over her 72 years on this earth with her gracious and giving heart. In her most recent years of retirement she enjoyed her many get togethers with her highly talked about "Red Hat Society." But no time was spent better than when she was with her great grandchildren Kanaan, Kohen, Savannah, Maleyah, Naomi, and Christian. She spent so many years as a mother. Her children and her grandchildren were all raised by her. She gave so much of herself to others that she finally got to feel the feeling of just being a "grandmother". Using this time to spoil them and watching the ones that she raised, raise their own. In doing so, getting to experience the feeling of all the laughter and happiness she had given everyone else over the years for herself. Barbara is survived by Carolyn Wideman (daughter), Justin Carter (grandson), Jesse Carter (grandson) and his wife Amber Carter, Dakota Wideman (grandson) and his wife Destinee Wideman, Jonathon Wideman (grandson), Adrianna Wideman (granddaughter), Victoria Wideman (granddaughter), Kanaan (great grandson), Savannah (granddaughter), Kohen (great grandson), Maleyah (granddaughter), Naomi (great granddaughter), Christian (great grandson), Sherline Lacy (sister) and so many other family members and friends.

Barbara J. WIdeman Daughter of Jack Harris, A decorated WWII Veteran and Louise Harris. Barbara sadly passed away on September 15, 2021 at the age of 72. She was Born Febuary 24, 1949 in Birmingham, AL. She attended Banks High School where she... View Obituary & Service Information

The family of Barbara J. Wideman created this Life Tributes page to make it easy to share your memories.

Send flowers to the Wideman family.